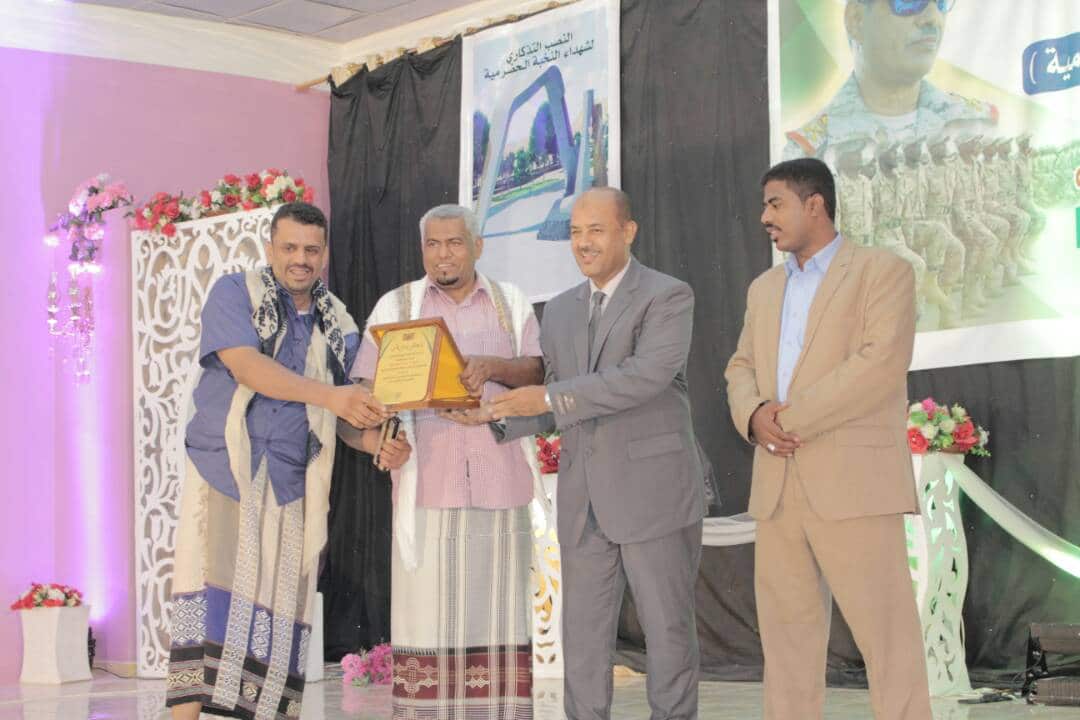 Under the patronage of Major General / Faraj Salmeen Al-Bahsani – Governor of Hadramout Governorate, Commander of the Second Military Region, and the Badgeqiq Real Estate Investments Foundation – a Diamond Patron – and under the slogan of loyalty to the Hadrami elite, the local authority in the Gail Bawazir District held this morning, Saturday 28 April 2018 AD, a rhetorical, technical and honorary ceremony on the occasion of the second national liberation anniversary Sahel Hadramout, in the presence of Sheikh / Khaled Omar Badaidiq – Chairman of the Board of Directors of Badgideg Real Estate Investments Corporation, Major General / Omar Mubarak Al-Haiqi, Advisor to the Governor, Dr. Salwa Mubarak Anbar – Advisor to the Presidency of the Republic, and Dr.Wagdy Bawazeer – Director of the Governorate’s Culture Office, Professor / Omar Al-Ashwali – Director of the Office of Planning and International Cooperation, and Colonel / Saleh Al-Abd – Director of Security Directorate.

And on the Nawras theater, the butterflies of the Continent glowed with a welcoming song entitled (Come on, come on!) .. followed by a paragraph from the oasis of poetry and a poem by Ibn Shuhair, the brilliant young poet / Abdullah Muhammad Hamdi, entitled (The Hadrami Elite) in which he excelled and the guests enjoyed their listening and admiration.

In the same context, the poet / Saleh Qahtan Al-Yahri presented his poem, which was recited by the journalist / Abdullah Al-Houri. The guests were entertained. The speech of the local authority in the governorate was delivered by Mr. Fahmy Badaoui, Deputy Governor for Youth Affairs, in which he conveyed greetings and congratulations to the governor of the governorate for the honorable ceremony. The operetta that lit the stage and titled (Remembrance and Launch) came from written and composed by the esteemed professor / Ahmed Faraj Khanbash and the performance of the distinguished vocalists / Lotfi Waban and Shaker al-Jaber Ahmad Badris and Rashid Basaad, and the participation of the Shabab al-Ghail band that presented traditional dancing paragraphs to the rhythms of the operetta.

And holding the conclusion was the honoring paragraph, where the local authority in the directorate honored both the governor of the governorate, the sponsor of the ceremony and the director general of the directorate … and also Sheikh / Khaled Omar Badgaidq – Chairman of the Board of Directors of the Badgeqiq Real Estate Investment Corporation, honored with a shield of appreciation and gratitude as a diamond sponsor for the ceremony. A number of outstanding students were honored in the Directorate, in terms of the educational or sports aspect, and so on. It is worth noting that the Badqiq Real Estate Investment Corporation has started work on the largest real estate project at the district level, which is the Khalidiya City project on an area of ​​about 300 acres in the city of Shihir, which includes more than 2000 housing units with public interests including a health center, schools, kindergartens and a shopping center (mall) A wedding hall and 5 mosques .. The project will provide all services to the city, including electricity, water, communications, sanitation and roads. The sale will be made by the residential plots system and the housing units system as requested by the customer.

badgidegNovember 10, 2020 Leave a comment on The Governor and the Badgideg Foundation sponsor the directorate’s second liberation anniversary ceremony Uncategorized

Welcome to WordPress. This is your first post. Edit or delete it, then start writing!